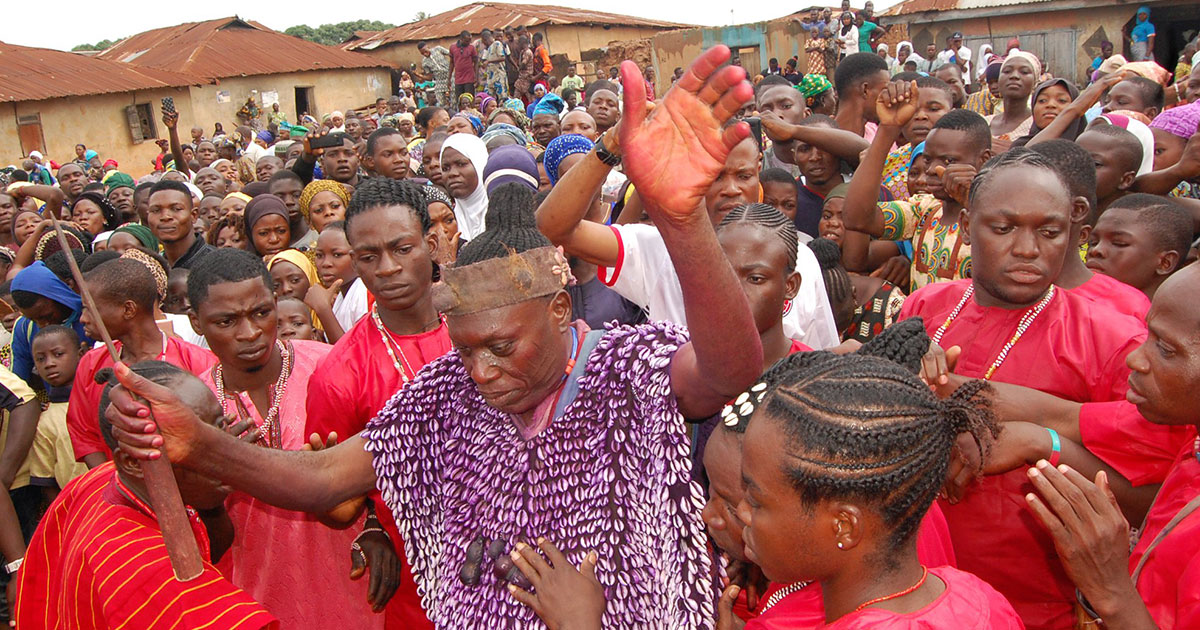 From tomorrow the world festival of Shango (Sàngó) is celebrated. One of the main festivals in Oyo, origin of our Ifá lineage.

Ifa practitioners from all over Nigeria and the world make these pilgrimages to Koso, where the Shango sanctuary is located, to participate in the festival that will be held until August 24.

The drums will sound during all these days celebrating the ceremonies to the Orisha Yoruba of thunder and fire and in the sanctuary of Koso some fifteen priests from Sàngó, led by the Mogba Koso, will help in the ceremonies making an offering with orogbo, followed by thousands of devotees . In addition, during the World Festival in Shango ceremonies will also be held in Ogun, Oya, Esu, Yemoja and Osun.

The Mogba Koso is the supreme head of Koso, the guardian of the ancient sanctuary of Sàngó Kòso and of the ancestral Crown of Sàngó, being responsible for crowning each new Alaafin as King of Oyo. To carry out his responsibilities effectively, he has the support of various bosses. And it is that in the city of Oyo there are other communities with their own Mogba under the control of Mogba Koso, but only four of them currently exist: Mogba Koso, Ona Mogba, Mogba Ekerin and Mogba Ajagba.

The incarnation of the Orisha at the World Festival in Shango

The most important moment of the world festival in Shango will come when the Elégún Sàngó Koso, the living incarnation of Sàngó, leads the faithful to perform one of the most sacred rites in the temple of Koso, symbolizing spiritual immortality.

The Alaafin attends the closing of the world festival of Shango every year as King of Oyo to attend cultural exhibitions in the Palace courtyard, while Elégún Sàngó Koso performs traditional ceremonies in the sanctuary. It is important to note that the Alaafin does not participate in these ceremonies since from the moment of his coronation he is prohibited from entering Koso, because he should not see Sàngó twice in his life. This is also why once the ceremonies in the Koso temple are finished and the Elégún Sàngó Kòso heads to the palace, the Alaafin must withdraw, because that day Sàngó is present in Oyo and he is their only sovereign, according to tradition.

To join the celebration of the World Festival of Shango, in Ilé Awo and in the applications Ifá Tradicional Pro and Ojú Odù we will dedicate this month to this powerful Orisha, with various information, prayers and images of the festival.